skip to main | skip to sidebar

'mysteries of the universe revealed' by the sweetie pie press

http://sweetiepiepress.blogspot.com/2009/03/mysteries-of-universe-revealed-they.html
Posted by Koffler Centre of the Arts at 12:05 PM No comments:

'thread bares all' by the sweetie pie press

http://sweetiepiepress.blogspot.com/2009/02/thread-bares-all.html
Posted by Koffler Centre of the Arts at 11:59 AM No comments: 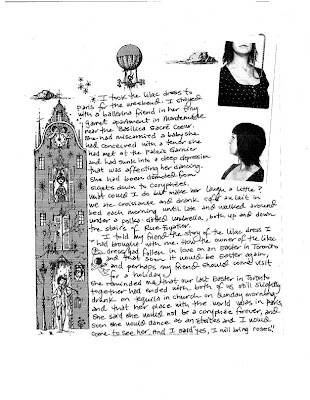 Posted by Koffler Centre of the Arts at 12:41 PM No comments:

Posted by Koffler Centre of the Arts at 7:46 AM No comments:

I saw the show with my 12 year old daughter and we both cried, a lot.

We did not borrow anything but have talked about what we would borrow or if we could donate from our own clothing, what would it be.

I have so many, many clothes. I collect vintage just about everything and my current love is feather hair pieces. I have a photo of my mum and dad when they first met at a wedding. My mum was a bridesmaid and wore a beautiful red velvet dress and a white feathered hair band.

She died on September 13, 2008 and for her funeral I had a black hair band made to wear at her funeral. It was just something I had to do.

I told a friend about it recently and she gave me a white feathered hair band almost exactly like my mum's.

It was an overwhelming and amazing gift and made me cry, which I seem to do so much these days.

My daughter said she would donate a bracelet my dad gave her for xmas this year. She was wearing it when my dad called on Jan 3rd, 2009 with the news that he got married. She tore it off her arm and doesnot want to wear it. She would love to give it a new story and we are working on a project together.

I have urged so many people to see this show and hope it means as much to them as it did to us.

Posted by Koffler Centre of the Arts at 10:59 AM 3 comments:

I borrowed the Indian Shirt...

In the exhibit, Dominique Denis wrote:

Indian Shirt
"Purchased in 1978... I was 13, and used to pretend to be into meditation... My room reeked of incense. Perhaps seeing Hair (the film version) was to blame. In any case, I was quite proud of the shirt, which cemented my reputation as the resident hippie wannabe in high school, where I was... a ... drummer in a band... For some reason my mother hung on to the shirt, and returned it to me in Toronto... my son Julien, who was then 12, found & adopted it... Julien is also a drummer... and he wore it for a concert of his ...rock band in school... I was proud of him."
Wait a minute - this sounds just like my now 16 year old daughter, Emma. "But that's me!" she said, when I showed her a copy of the text. Knowing she would feel that way, I then pulled out the shirt (borrowed!) to show her. Instant love ensued, between girl and shirt. I asked her if I could make a photograph of her in the shirt, to post here - and she slipped into it (barely - not being 13 anymore...) and found that it went beautifully with her other trappings of latter-day hippie spirit.
Here's what she said: "This is the most comfortable shirt I've ever worn. It makes me think of music festivals in the summer [drum circles!]. The hippie thing makes me smile, 'cause that's me, more or less. And now the shirt smells of incense again." [from having been in her room for just a few minutes...]
When my daughter recently asked me if I had been a hippie when I was young, I had to tell her that I would have left home straight-away to head for Haight-Ashbury, but sadly I was under 10 years old at the time... So, I had to stay home and make do, in the ensuing years, by piecing together hippie clothes out of old fancy linens I found about the house...
Somehow, this mid-century zeitgeist keeps returning to haunt us. Is it about style or philosophy? (A bit of both I suppose...)
As soon as I was old enough, I left the (then) sleepy town of Oakville to head straight-away for Toronto. Once there, Honest Ed's became a significant thread in my existence - this is where poor students and starving artists went to find the practical domestic trappings of their skeletal approximations of "home" - very sketchy in terms of possessions, but bursting with life and crazy creativity. So, Mr. Mirvish wasn't only there as a haven for the new-comers to this country, with their often heartbreaking stories. He also assisted at the birth of so many "vies bohèmes" - a slighter, but decidedly rich side to the story.
Really though, the impression I take away with me in the end is a tangible sense of that delicate thread of tender affection that is continually passed on, down and around - ties of family and friendship. It does make the world that looks flat under our feet feel a little more like the circle we carry in our minds.
Vicki O'Donnell and Emma Hazlewood
Posted by Koffler Centre of the Arts at 6:13 AM No comments:

Posting to this blog....

Hi everyone - please feel free to post comments or stories in the Comments section of this post (at the bottom).

I will copy the stories and turn them into posts so they appear on the main page.

Or, you can e-mail your story and image to:

Posted by Koffler Centre of the Arts at 9:07 AM 9 comments:

Koffler Centre of the Arts
A world of ideas, discovery, passion, inspiration, creativity, and fun! There is always something happening at the Koffler - Canada's only multi-disciplinary, Jewish contemporary cultural institution. So come early. Stay late. (and bring your mother!)